I was supposed to travel to Italy today. In a non-pandemic world, I would have already been packed, staying up all night as I tried to figure out how many outfits I really need for two weeks. I was going to attempt to fit only “the essentials” in a carry-on backpack so I didn’t have to pay extra for a checked bag. I wanted to see if I could learn how to be a minimalist, so I could eventually get rid of all my things, excluding pets and my French horn, of course, and move to bella Italia to live La Dolce Vita.

I’ve been studying Italian since 2004, when I spent six weeks in Rome performing in a summer music festival. I’m a professional musician, and I had received my Master’s in French Horn Performance just three years earlier. I was feeling stuck, literally, teaching music and running a dormitory at a boarding school. I wasn’t performing and I needed to do something enriching for me. As everyone predicted, I fell for un bel romano, a local trumpet player who sat down right next to me at the first rehearsal. More importantly, I fell in love with the Italian language and culture. From my first full day in Rome, visiting the Pantheon and Piazza Navona, something told me I belonged there and needed to live there one day. Though the relationship with the Roman ended, I’ve never given up on my dream to live in the Eternal City. In 2019, I took a Mediterranean cruise with one of my best friends. We visited both Firenze and Pisa on my birthday, and it was then and there that I decided I would probably be ok with living anywhere in “the boot.”

Back to today: I was going to take a two-week immersion class starting Monday, which I hoped would bump my fluency from a B1 to B2 level. (More on what that means here.) I would spend mornings with a small group of no more than six students, then spend the afternoons exploring Florence and Rimini, working on my confidence in speaking Italian with i cittadini, the locals.

But the same day I bought my super-awesome ticket (one-way) to Firenze for just over $400, I learned that Italy had just been hit hard by the coronavirus, COVID-19. In case you’ve been living in the mountains without access to any sort of news, Italians just got out of nationwide lockdown this week, after EIGHT weeks of staying at home. Fun fact: the word “quarantine” comes from the Italian word quaranta, which means “forty,” as in the number of days most of us have been sitting at home at this point. Because of this virus, Italians were in quarantena for cinquantasei giorni. (56 days!)

Needless to say, it’s probably going to be a while before I’m able to go to Italy, and the worst part for me is not knowing when that will be. Thankfully, I’ve been able to find some things that may tide me over until I’m actually in il bel paese (the beautiful country.) I know I’m not the only one who had to cancel plans, so hopefully these suggestions will help inspire you to find ways to bring your travel destination to the comfort of your quarantine location.

I’ve been studying with a native Italian speaker and amazing language teacher for almost five years now. I learned about italki from the 30 Minute Italian Podcast (archived episodes and show notes can be found at The Iceberg Project.) What I like about italki is that you can study any language with native speakers for a fraction of the price of what you’d pay for a tutor here in the United States, and there’s a teacher for everyone. If you want to just have a conversation, there are tutors (some available instantly!) who will work on the basics with you. If you’re a nerd like me and want more structure, grammar, and homework, there are Certified Teachers that might charge more, but they’ve got the degrees and experience to back it up. Additionally, you can become friends with other language learners from around the world, write messages back and forth, or even video chat on Skype for free! I admit I’ve only done that once, but we had a great time talking about music, half the time in Italian and half in English. Here’s $10 toward your first lesson! (Full disclosure, this IS NOT a sponsored post, but that link does give me credit toward my studies, too, if you redeem the deal.)

Again, if you’ve maybe been living under a rock, you haven’t heard of this great application called Zoom. Before March 12, my own personal version of The Day The Music (Gigs) Died, I could count on one hand the number of Zoom calls I’d done. But now all the cool kids are doing it! Since drinking wine by yourself EVERY day doesn’t seem like a good idea, I have randomly thrown a few virtual happy hours, and talked with friends I haven’t seen in twenty years, even a friend in Norway! Tell me that’s not awesome. I have a weekly virtual book club, a weekly catch-up with some teacher friends, and my favorite, Italian Meetup on Zoom!

Our local Meetup group for Italian speakers usually meets at a little European-style deli every Saturday morning. We’ve become so big that the group has split into a beginner group that is learning the basics, and an advanced group where we speak only Italian. Our group is comprised of people who have worked for the American Embassy in Rome, second and third-generation Italian-Americans, and native speakers from Italy and Sicily, too! Though I miss seeing people in person (in particular, Maurizio, one of the Italian employees) and I really miss having un doppio espresso (way better than a Starbucks DoubleShot), Zoom has really allowed our group to flourish. Because I live in Florida, I am one of two non-retired people in our group. But guess what? The septuagenarians are finally learning how to use the iPads we gave them! I joke, but honestly, one thing that I like about our Zoom setup is that instead of running our groups concurrently at the deli, we have switched to consecutive Zoom calls. This way beginners can join our meeting and mute their microphones, working on their comprehension by listening, and then when our meeting is done, some of the members from the advanced group go to the beginners’ call to help them with their conversation.

Baby Goats and Other Cute Animals

Something a few friends and I recently did reminded me of my time spent just outside Rome, when I would look for the man who walked his herd of sheep from pasture to pasture every day. This past Sunday, we had coffee and a Zoom call with farm animals! We met Lauren, who took us on a walk around Catskill Animal Sanctuary and introduced us to a couple of very friendly sheep, and two pigs whose ears were as big as my Basset Hound’s. For the first twenty minutes of our Zoom call, we got to meet the animals, ask questions, and learn about the sanctuary’s mission. It’s a very creative and fun way for them to raise money to save these animals, as charities all over the world are hurting financially. They just rescued four baby goats, and as soon as they have been medically cleared, we’re totally scheduling a Goat-2-Meeting (I -wish- I had come up with that) for coffee and cuteness!

Finally, and what just might be the thing that gets me through all the unknowns of this pandemic, is REAL Neapolitan pizza from Talia di Napoli. A friend shared an article about ways to support the Italian economy from home, and not only is this one that’s in my price range, it helps my quest for real Italian pizza here in Florida, because it is actually from Italy, full stop. Talia di Napoli’s “sleeping pizzas” are made in Naples with real Italian ingredients, then flash-frozen and shipped with dry ice right to your door. Read their story here, then go pre-order yourself a pack of pizzas, because they’re sold out for the rest of May! I literally almost cried when I opened my margherita pizza, because I could smell how fresh the tomatoes were. In under ten minutes, I had a real slice of pizza napoletana in my mouth and it was deliziosa!

Like you, I don’t know what the future brings.

When I think about the future too much, I get scared, anxious, and sad. But I have things to look forward to, like Saturday morning Italian Meetup.  I’ll also be taking online classes with Istituto Il David, the school where I was originally going to be taking my immersion course. There are many language schools like this, but I feel it’s best to put my support behind the one I had originally chosen.

I have more ideas to share with you, especially for those who want to learn a language. I love Duolingo, but there’s SO much more out there than learning how to say “la ragna beve latte.” Who actually SAYS, “The spider drinks milk?”  Send me a message at [email protected], or find me on italki!

In the meantime, have a glass of vino with your friends (on Zoom, for now), enjoy some formaggio, and just know that as the Italians say, tutto andrá bene. Everything will be ok. 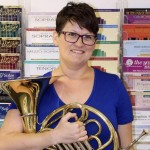